PIKES represents all the information contents in an RDF model organized in three distinct yet interlinked representation layers: Text layer, Mention layer, and Instance layer. The main classes and properties of the model are shown in the figure below, using an UML-like notation and different colors for the different layers (text in red, mentions in green, instances in blue). 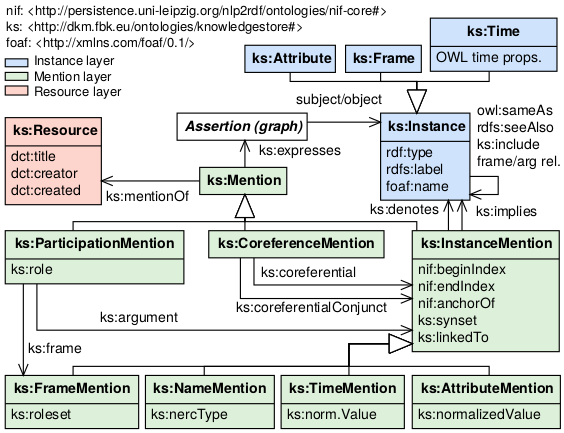 This is the textual content from which knowledge is extracted. It consists of ks:Resources (i.e., documents) identified by URIs. Each resource consists of a raw text and an accompanying RDF description rooted at the resource URI, including metadata attributes such as dct:title and dct:created.

The instance layer describes the things of interest contained in a textual resource, abstracting from the actual ways they are expressed in the text. The main objects are ks:Instances of persons, organizations, locations, frames, dates and other entities of the domain of discourse. Instances are typed with respect to various taxonomies, are enriched with textual properties (e.g., rdfs:label and foaf:name), and are linked by a number of relations, including owl:sameAs assertions triggered by ks:CoreferenceMentions and frame-argument participation assertions triggered by ks:ParticipationMentions where the property conveys the role played by the argument. In this representation, frame instances reify complex relationships and are the main vehicle for relating instances.

Put together, properties ks:denotes, ks:implies and ks:expresses allow any instance and assertion in the Instance layer to be always referred to the mention(s) from where it was derived, thus enabling a fine grained tracking of the specific piece of text from where a bit of knowledge was extracted.

PIKES and the KnowledgeStore